The following is a transcript of the video.

You’ve probably doodled with one of these in class: a blue Bic pen. But when Oscar Ukonu uses it, he creates this — a monochromatic and hyperrealistic masterpiece that can sell for up to $600 per print to his clientele in Nigeria and around the world.

To create something like this, Oscar will take up to six weeks and go through 10 pens! It’s not that they all run out of ink, but because if he used only one pen the whole time, the nib would start bleeding from the constant friction. That’s how much intensity creating these portraits requires. Intensity, and a lot of skill.

So, how exactly does he make intricately detailed faces out of one of the most common office supplies?

It comes down to three techniques.

You can see that here. The single lines he’s making are hatches, which create the base layer for creating shading and tones.

They’re typically used for lighter sections, but there can be variation even within hatching based on how many lines he draws, their closeness, and how much pressure he applies. The direction of the hatching can make different sections read as contrasting.

For example, in this section Oscar kept the lines relatively far apart to create an especially light part of the image. Compare that to here. There’s about double the amount of lines in the same amount of space. The section is still lighter than the more shaded parts of the image, but it’s darker than where Oscar hatched more spaced-out lines.

Hatching in curved lines creates contours on a face.

Crosshatching is used for shadowy areas. You can see it a lot in comic books, but it’s much more detailed here, and there’s a lot more of it in order to make it hyperreal. The overlapping crisscrosses create the illusion of depth.

You can see it being used in this section just under the lips to create a shadow. Layering them makes the shadows even deeper and darker.

With these two techniques, the final piece can show a full picture of the scene Oscar is trying to set. As a viewer, you’ll be able to understand the lighting of the picture, which sets the mood of the whole piece. But to really bring the portrait to the finish line, Oscar will use his final technique, scribbling.

But when he’s talking about scribbling, it’s not necessarily the doodling and randomly drawn lines you might think of. Oscar’s version of scribbling is an improvisation based on skill that years of being an artist has taught him. He’ll use this for nitty-gritty details like hair textures you can see here. It’s his technique for adding finishing touches.

But before any of this work happens, each of Oscar’s pieces starts with him taking about 100 photos of his subject, which get narrowed down to the 20 or so he’ll use as reference when he puts pen to paper.

The piece he’s working on today is called “Disinformation of a Republic.”

He’ll start with a pencil sketch of the image so that the proportions are scaled to the size of the canvas he’s working with. This will give him a foundation and help him understand the basic shapes he needs to create.

Then he’ll work from the top down, starting with the newspaper that’s on top of the woman’s head. Within it, there’s tiny writing and other small images, like the photos that are typically attached to the story in the paper. Because these are so small, it will take even more precision and thoughtfulness. This section will be a mix of all three of his techniques since it wraps around the head and will have varying lights and shadows.

You may be wondering what happens when he makes a mistake. Well, Oscar says that he’s learned to embrace those small mishaps into his pieces. However, he does take some small precautions. Although the pens he uses don’t tend to smudge too much, he’ll usually lean his hand on a piece of paper as he draws to minimize any smudging that may happen.

Once that section is done, it’s time for the section underneath, which includes most of the face, part of the ears, underneath the eyes, the nose, mouth, and chin. Here, Oscar has decided that the light source is hitting the person from the right side of the face, which means, generally, the thickest layers of hatching and crosshatching will happen on the left side of the face.

From there, he’ll continue drawing from the neck down, following the same idea of where light would naturally hit and repeating these two techniques for the most part.

Scribbling comes in mostly when Oscar is able to look at the entire image and go back in to improvise and elevate the details, like deepening the shadow on this pearl earring or adding a piece of stray hair that might realistically be there.

After six weeks of all of this hatching, crosshatching, and scribbling, Oscar’s piece will come together to form a portrait. 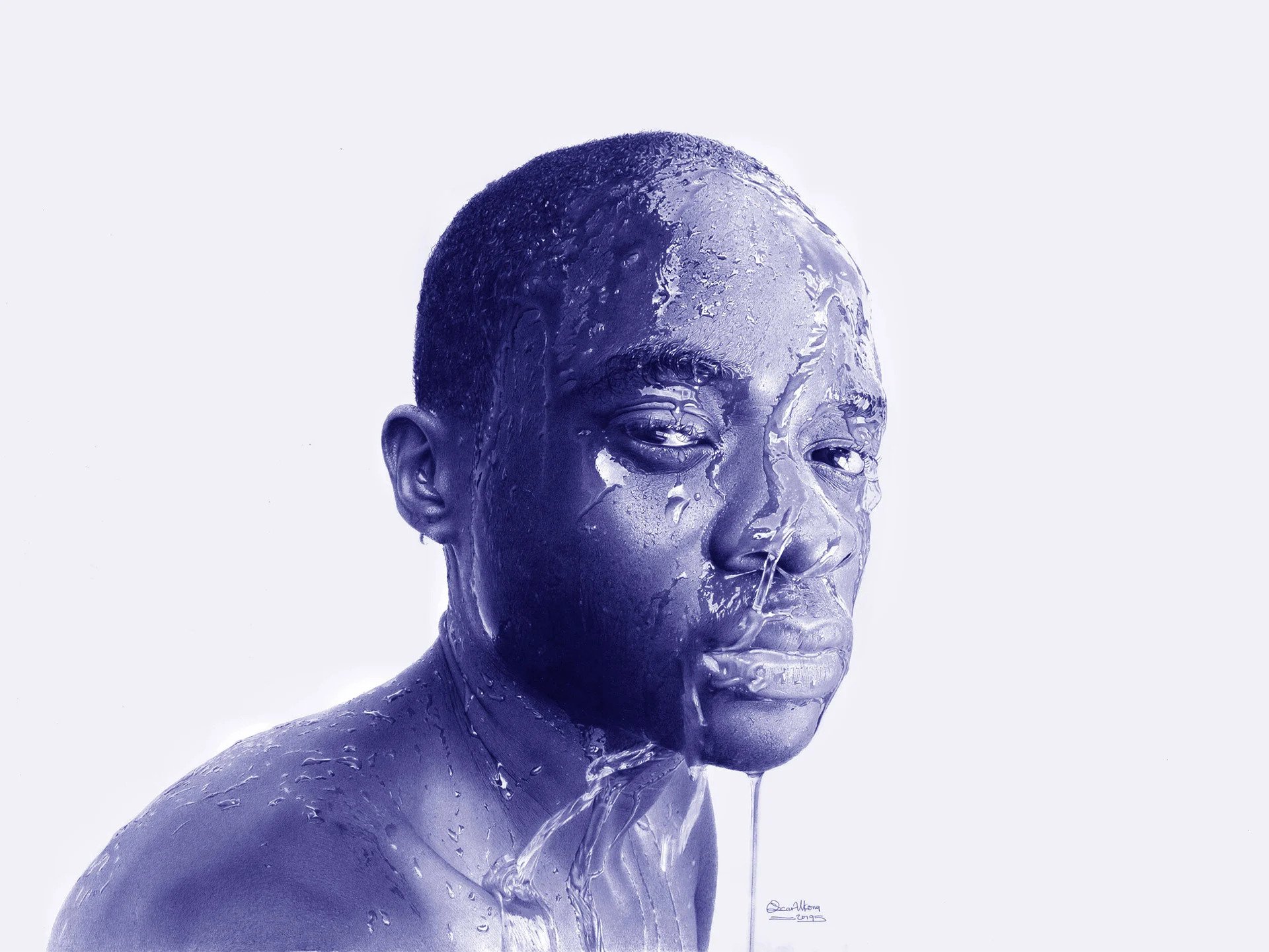