Ghana’s parliament saw drama unfold as the newly elected Members of Parliament (MPs) selected a Speaker for the eighth Parliament of the fourth republic.

The confusion started when the National Democratic Congress (NDC) MPs sat on the Majority side of the chamber even before the life of the seventh Parliament could end.

An MP from the governing New Patriotic Party (NPP), Ursula Owusu decided to still sit on the Majority side. This developed into a scuffle which took the marshals of Parliament to break up the fight.

One would have thought that was the end of it and no more scuffles would ensue. However, this was rather the beginning of more attacks in the chamber.

After midnight, the Clerk of Parliament, Cyril Oteng Nsiah chaired led the MPs-elect to elect a Speaker.

The NDC MP-elect for Assin North who has been injuncted from holding himself as an elected MP by a High court appeared in Parliament.

This brought about another banter which went on for a while. The Clerk subsequently agreed to allow the MP-elect to partake in the election of a Speaker.

The two people nominated to be Speaker were Prof Mike Ocquaye and Alban Bagbin.

The election process was disrupted often as some minority MPs, led by their Chief Whip, Mohammed Mubarak Muntaka carried the ballot box away.

The security stormed Parliament after the several commotions recorded in the Parliament. The security personnel came in after some NDC MPs, for the fourth time, disrupted the electoral process of a new Speaker for the House.

Some members of the Minority, led by their Chief Whip, Mohammed Mubarak Muntaka disrupted the election process by carrying away the ballot box.

On the fourth time, they did not only snatch the ballot box but the MP for Yapei Kusawgu, John Abdulai Jinapor was seen together with Muntaka kicking the ballot booth.

They argued that the NPP was breaching the order of secret voting by showing their ballot to their whip, Frank Annor-Dompreh before depositing it in the box.

After all the above ensued, Alban Sumana Kingsford Bagbin was elected as Speaker for the eighth Parliament of the fourth republic.

He was sworn in by the Chief Justice Kwasi Anin-Yeboah. 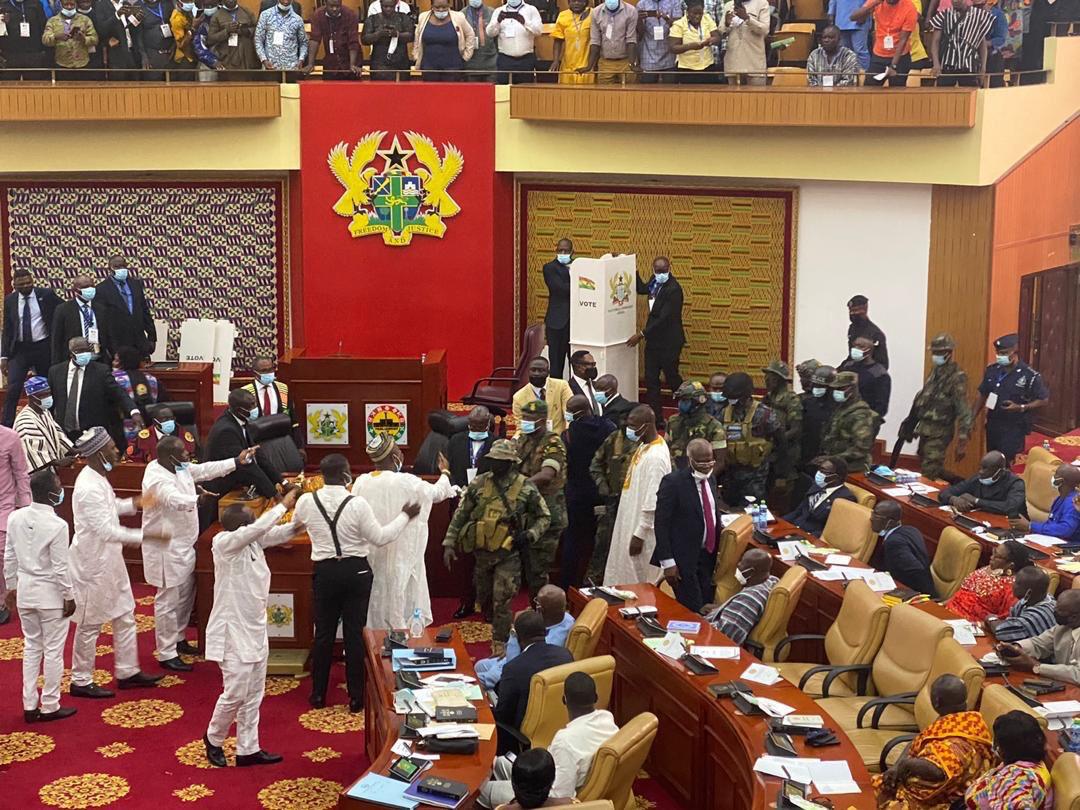