When most people talk of massages, it means they visited a spa where a part or all of the muscles and joints of their body was kneaded or rubbed with the hands, to relieve tension or pain.

However, a spa in Cairo, Egypt used what many would believe to be a weird method in massaging its customers.

The owner of the spa, Safwat Sedki, in a CNN video said the snake massage relieves joint pains.

He admitted in an interview that when he started most people were skeptical about it and so he initially offered his services for free.

“When we first introduced the session a lot of people were afraid. They said ‘snakes? How can you use snakes?’ But once we started explaining to people the benefit of this massage the idea was accepted by a lot of people especially those who have a phobia of snakes.”

Sedki said that customers now pay about 100 Egyptian pounds or $6.35 per session of the snake massage.

In a video, Sedki is seen putting a number of snakes on a client’s oily back. The snakes then begin to wriggle on the customer’s body as they flick their tongues out.

Sedki explained that there are about 35 types of snakes in Egypt. Out of this number, he said that 7 are dangerous and venomous “but the rest are not and they do not have any venom. We work with those that are not venomous.”

Is the snake massage session something you would like to try at the spa? 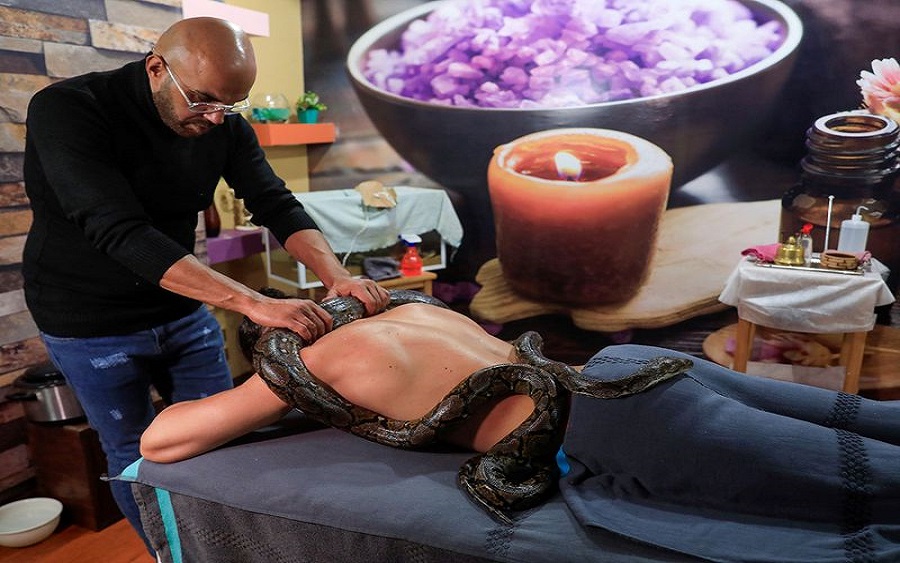