The sensational clip comes a day after an American restauranteur alleged that Africa’s richest man, Aliko Dangote, dated her and broke her heart in ‘‘1000 pieces.’’

The controversy over Aliko Dangote is turning murkier by the day. On New Year’s Day, an American restauranteur identified as Bea Lewis, broke the internet when she alleged that the Nigerian industrialist, dated her and broke her heart in ‘‘1000 pieces.’’

In another turn of events, another lady (@allrounda1) released a video in the early hours of today, alleging that she had a relationship with Dangote. The video showing the lady and Mr. Dangote on a couch having a good time has since gone viral on social media, with many people battling their disbelief of seeing Dangote’s buttocks clearly exposed in the video.

The woman, whose first name appeared to be Courtney, also posted pictures of Mr. Dangote alighting from a luxury plane in a private hanger, but later deleted them, claiming she had been flooded with requests from bloggers to comment further on her affairs with Africa’s richest man.

Although Dangote’s media aides are yet to comment on the scandalous affairs; it’s highly unlikely a statement would be made since very little was known about the wealthy billionaire’s marriage and divorce in the past. 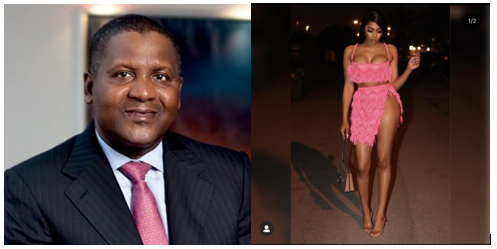