French lawmakers have unanimously voted to return thousands of prized African artefacts looted by colonial forces more than a century ago.

MPs in the National Assembly, the lower house of parliament, approved the restitution bill which will now head over to the Senate after 49 members voted in favour of the bill—and none voted against it. If approved by the senate, France will officially restore to Benin 26 items from the Treasure of Behanzin, looted during the 1892 pillaging of the palace of Abomey.

They include the throne of King Glele—a centrepiece of the 70,000-odd African objects held at the Quai Branly-Jacques Chirac museum in Paris, a royal throne and statues taken by the French army during a war in Benin—then the wealthy African kingdom of Dahomey—as well as a sabre once wielded by a 19th-century Muslim sheikh in what is today Senegal.

Speaking on the new development, France’s former minister of culture, Franck Riester said the return of the artefacts was part of a “strengthened desire for cooperation” with the two francophone West African countries.

Franck, who spoke to the assembly on behalf of the current minister of culture, Roselyne Bachelot who was isolating after coming into close contact with a positive coronavirus case, insisted the bill was “not an act of repentance or reparation, nor a condemnation of the French cultural model”.

The groundbreaking move by France to return stolen artefacts has now put several other European museums under immense pressure from the international African art activists concerning the restitution and repatriation of African objects back to their sites of origin.

According to reports, museums in Belgium and Austria house tens of thousands of African piece. Germany also recently opened a refurbished museum in Berlin awash with items from Africa and Asia but come under pressure from critics for the repatriation of African objects back to their sites of origin.

The British Museum, on the other hand, has long resisted calls to return the Benin bronzes that once decorated the royal palace of Benin but were looted from what is now Nigeria by British troops in 1897.

“If Africa is not represented, that is a disaster. I think we need to remember London is a global African city, arguably the biggest African city in the world, if you think of all the different people. It’s really important that people of African heritage living in the UK and in Europe can see cultural artefacts of their own heritage.” 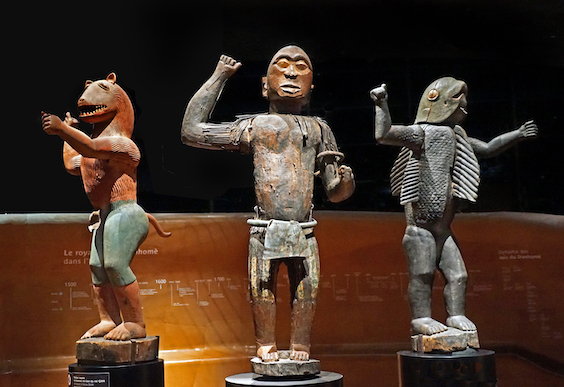